Works are complete on First phase of landmark rapid charging station on First Bus Glasgow Caledonia depot ahead of the city hosting COP26 later this year. 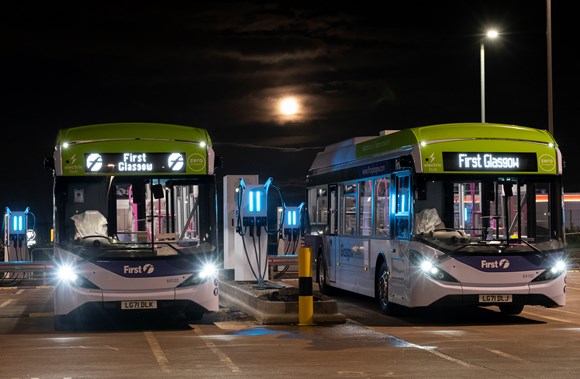 First Bus Glasgow Caledonia Depot EV Charging hub-4
With phased completion for the remainder of the work scheduled to take place across the next 12 months, the depot has been designed to accommodate and charge up to 300 EV buses on site - and will see the introduction of  150 electric buses over the next 18 months.

First Bus Glasgow Caledonia Depot EV Charging hub-11
Following completion, the adapted depot will have the capability to charge 89% of the depot’s electric bus fleet at the same time using smart charging software. First Bus’ long-term objective is to ensure that the site is fully prepared for the transition to a 100% zero-emission fleet. This will include opportunities for further on-site renewable energy generation and storage.

Duncan Cameron, Interim Managing Director for First Bus in Scotland, said: “This is a proud moment for all of the First Bus Scotland team - especially the local depot staff, who can now see the exciting future ahead for the company as this project comes to life. These 150 new electric buses are set to transform not just our emissions, but customer experience too, as they offer a much smoother and quieter journey.

First Bus Glasgow Caledonia Depot EV Charging hub-7
Frank Mitchell, Chief Executive of SP Energy Networks, said: “With more than a quarter of the UK’s carbon emissions coming from transport, decarbonising this sector is vital if we are to deliver on government Net Zero targets. And our electricity networks have a critical role when it comes to the delivery of ambitious Net Zero plans across Scotland like those announced by First Bus – they are the key to making this happen.