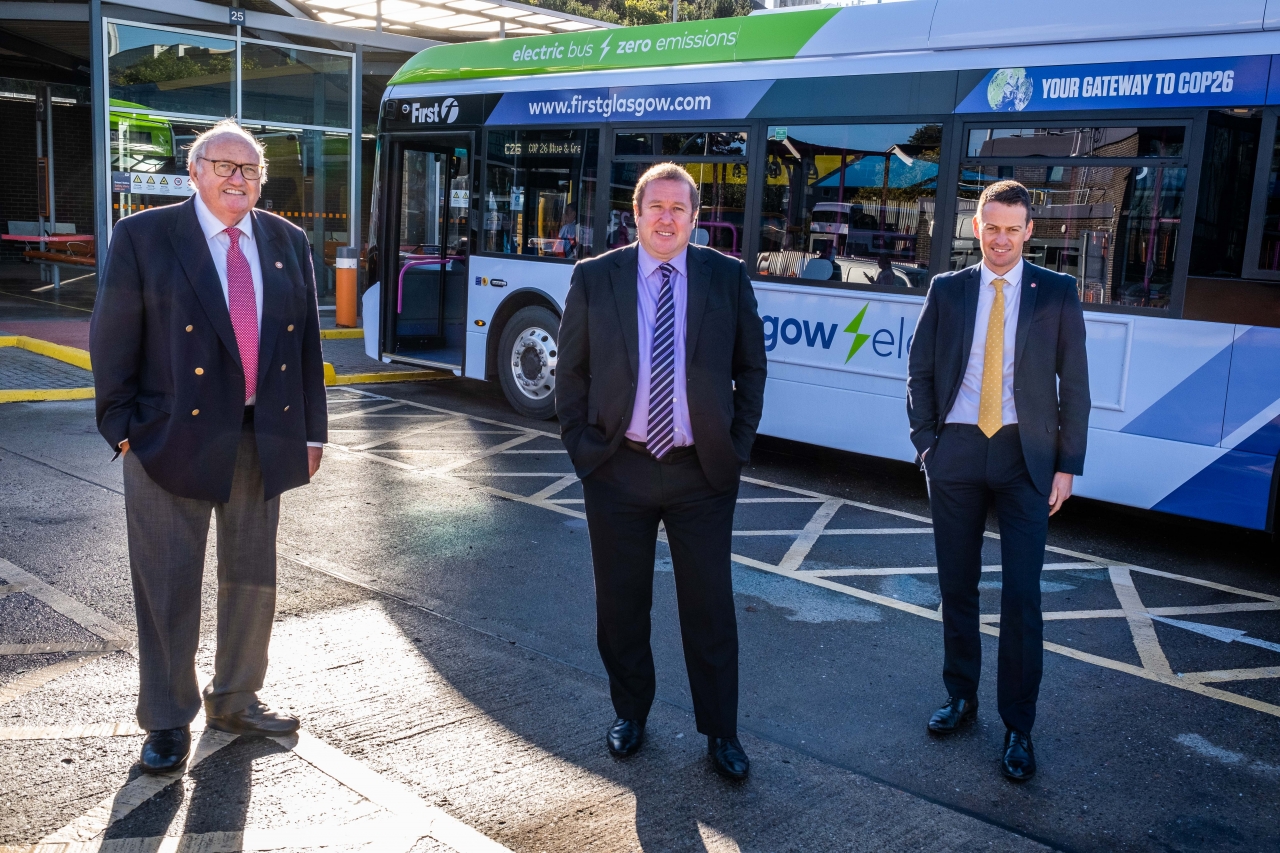 First Bus has been appointed the official transport operators of the COP26 delegate shuttle service. This follows a tender process run by Strathclyde Partnership for Transport (SPT) on behalf of the UK and Scottish Governments.

The shuttle service will provide a fast and frequent link for all delegates attending the event between the city centre and the Blue and Green zones on the event campus based at the SSE Hydro and Scottish Exhibition & Conference Centre site.

The new buses, which were part funded through Transport Scotland’s Scottish Ultra Low Emission Bus fund (SULEB), can operate a range of up to 160 miles on a full charge with zero emissions and will provide delegates with a state-of-the-art new fleet to take them to and from the event.

Duncan Cameron, Interim Managing Director, First Bus in Scotland said, ““First Bus Scotland are delighted to have been chosen to operate the official COP26 shuttle service and will be working closely with SPT, Transport Scotland and the Cabinet Office to ensure a smooth and efficient service can be delivered for all delegates attending the event.

“It has been a long time in the planning and it is exciting to now be in the build up to the event officially. It is vitally important that everyone takes the time to familiarise themselves with all diversions and transport plans in order to keep Glasgow moving and deliver an event that the whole world will be proud to be a part of.

As leaders in sustainable mobility, we are fully aligned with the Government’s ambitions for a net-zero carbon transport system, including zero-emission bus fleets. We have already committed to achieving this by 2035 and we look forward to showcasing this to delegates over the course of the event.”

SPT Chair of Operations Committee Councillor, David Wilson, said: “COP26 is a huge opportunity for Glasgow and we all want to ensure the visiting delegates from across the globe are able to travel around the city as easily and efficiently as possible.

“SPT is, once again, proud to play its part assisting with the transport organisation across Glasgow while the city hosts yet another major international event. We’ve procured on behalf of the UK and Scottish Governments this Zero Emission shuttle bus service to ensure we meet the transport demands of COP26 and to ensure our international visitors can move around the city.

“Working with First Bus Scotland to deliver the official COP26 Zero Emission shuttle service will mean delegates can travel to the event by sustainable public transport and, where they hopefully, can work to deliver a Glasgow climate agreement we can all be proud of.”

The SULEB scheme funding aims to help bus operators bridge the gap between the cost of diesel and zero emission fleets.

The ambitious collaboration with Transport Scotland will not only help First Glasgow replace 126 of the oldest buses in its fleet with new zero emission buses; it will also help transform their Caledonia bus depot on the south side of the city centre.

Already the UK’s largest depot, the investment will see it converted into one of the UK’s largest electric fleet charging stations, with the potential for over 150 vehicles to be recharged at a time.

Further demonstrating First Bus’s commitment to the communities it serves, the 126 new vehicles for Glasgow will be built by Scottish bus builder Alexander Dennis Limited (ADL) with their partner BYD. Their Scottish base in Falkirk will play a significant role in delivering these vehicles over the course of the next two years.

“I’m really pleased to see Transport Scotland’s SULEB scheme helping to fund this significant order of new electric buses, as part of our commitment to meeting Scotland’s world leading climate change targets and leading a green recovery from the pandemic.

“It’s a real success story that these buses will be manufactured by ADL in Falkirk – supporting jobs in bus manufacturing and benefiting the wider economy before they enter service for communities across Glasgow.”