SPS, which started in 2016 as a joint venture with 50/50 ownership between First Bus and Somerset-based JJP Holdings (JJPH), operates the contract to provide transport for workers employed at the Hinkley Point C nuclear power station near Bridgwater.

The company has grown in tandem with the increasing amount of work on site and now employs around 600 people running a 156 vehicle-strong operation, delivering shuttle services seven days a week to and from Hinkley Point C. The business has annual revenue of approximately £37m.

Jonathan Jones-Pratt, Managing Director at JJPH, won an initial contract at the site almost ten years ago with his company Crosville Motor Services, then running just a handful of minibuses as work got under way.

He said: “To see what’s been achieved at Hinkley Point C is remarkable and I am immensely proud that the business I started has been taken to new levels thanks to the joint venture with First Bus, and has played a key role in enabling many, many workers get to and from the site safely and efficiently.” 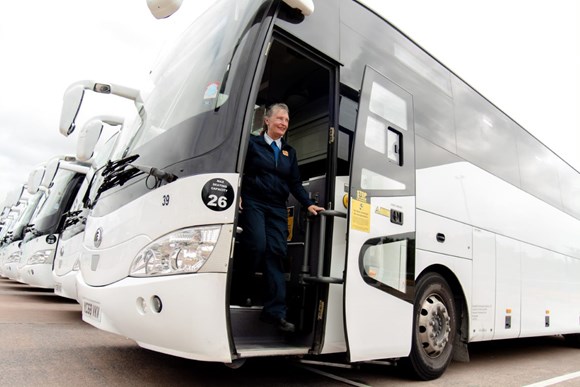 Joe Thompson, Portfolio Managing Director at First Bus said: “The rise of SPS in the last five years has been extraordinary thanks to the close collaborative work between First Bus, JJPH and of course site operations at Hinkley Point C. The operation has had a positive impact on the number of cars that would otherwise be on the roads and has thereby contributed to a reduction in overall carbon emissions and air quality in the area.”

“The team has established and grown a first-class operation, playing an integral role supporting one of the UK’s largest and most complex infrastructure projects where excellence is a prerequisite.”

He added: “The purchase of the remaining 50% of SPS shares forms part of our wider strategy to develop and grow our offering in business-to-business services and is an important milestone.”

Jonathan Jones Pratt continued: “A huge thank you to all of our employees who have worked hard and diligently over the years, to the thousands of passengers who have used our services and to everyone involved in bringing this remarkable development to Somerset and making such a positive contribution to the community here.

“I feel that this is the right time to conclude a sale and step back from the SPS business in order to hand the reins to First Bus. I see this as a significant milestone which will support the delivery of many benefits to JJPH. This deal will provide the group with the funds to continue our wider visions in business development and re-focus group strategic direction.”

Joe Thompson said: “We thank Jonathan and the entire team for their energy and drive as partners in our joint venture. We’re excited about the future and continuing to ensure the safe, sustainable and efficient transport for Hinkley Point C workers. We look forward to leading SPS to further growth and success.”